The Lost Art of Hood Ornaments

Published by Randall Cass on December 30, 2015 in Off the Radar

When you go to as many car shows as I do, you tend to look for certain photographic elements to add to your collection of automotive journaling.  I try to take shots of cars from all angles, including what I like to call the power shot – get down to hood level and shoot from the corner of the headlights to reveal the side of the car as well as the grill.  This angle makes most cars look their best.

But one of my favorite photo subjects seems to be hood ornaments.  I have amassed quite a collection of hood ornament photos over the years, and to be honest, some of them I can’t identify because I didn’t get a corresponding shot to help identify the make.  I’m in a photography twelve-step program to help overcome this issue, so hopefully I’ll be cured soon.

I’ve always considered hood ornaments to be an under-appreciated art form.  To be sure, there are collectors out there who share my sentiment, and some light research revealed quite a cottage industry for hood ornament collecting.  But in my mind, hood ornaments belong on the intended placement for which they were designed, not mounted on a plaque hidden in a collection case in someone’s garage (or worse, basement).  In other words, hood ornaments should be left on a car’s hood.

I guess it takes a guy of certain years to appreciate the intricacies of the hood ornament. Since U.S. automotive regulations introduced in 1968 effectively ended fixed stand-up hood ornaments as well as spinner wheel protrusions for safety reasons, chromium mascots have been fading into history alongside such notables as bias-ply tires, vent windows, oil bath carburetors, under-dash mounted air conditioners and AM-only radios.  Good company, indeed.  But like all automotive improvements necessitated by change over the years, what was the catalyst that propelled the venerable hood ornament into a marque-defining icon?

To understand that, let’s go back a century or more to the very early horseless carriage industry.  In those early years, automobiles had radiator caps outside of the hood and on top of a grill.  This is because many early engines did not have water pumps, but instead used a circulation system based on the thermo-syphon principle.  Think Model T here.  This was a common engine-cooling design of the era in which hot water, being less dense, would rise to the top of the engine and up into the top of the radiator, then descend to the bottom of the radiator as it cooled and flowed back into the engine.  This type of engine overheated if pushed hard, so easily adding water to the radiator was a must, hence the grill outside and in front of the hood.

In 1912, the Boyce MotoMeter Company was issued a patent for a radiator cap that incorporated a thermometer that was visible to the driver with a sensor that measured the heat of the water vapor instead of the water itself.  This was effectively the first temperature gauge.  As time went by manufacturers began using water pumps to help cool their engines and subsequently moved temperature gauges to the dashboard.  But radiator caps were here to stay and were already being customized by car makers and individuals alike.  Taking the functionality out of the radiator cap opened up the artistic possibilities of a previously overlooked feature.

Hood ornament design flourished from the 20’s through the 50’s into the 60’s.  Famous sculptors and artists were commissioned to create lasting designs for such marques as Rolls Royce, Jaguar, Bentley, Pierce Arrow, Packard, Lincoln and others.  But mainstream brands also received significant designs that defined their images through the years such as Buick, Pontiac, Ford, Plymouth, Nash, Chevrolet, etc.  And the range of subjects was seemingly endless.  There were flying ladies, archers, goddesses, dogs, birds, Indians (of the Native American variety), rockets, jets, rams, jaguars, fish, sailing ships, you name it.

And they all invoked a sense of speed, stature and style.

The automotive world will never again see the likes of the hood ornament as a staple of design.  There are still badges, nameplates and the like adorning modern vehicles, but there’s nothing close to the idolatry of fantasy, whim, desire and pure marketing savvy displayed on nearly every car made in the first half of the last century.

Maybe this is why I like car shows so much.  I love documenting automotive history through photography and researching what I’ve shot to gain knowledge and insights on each make. It’s what I do as a car nut.  And there’s no twelve-step program for that.

Below are some of the shots I’ve taken over the years of various hood ornaments. I can’t show all that I’ve taken, because that would take up more space than my website will allow. But these are a good representation of some of the more identifiable marques, both upscale and mainstream.  Also, here are a couple of links you might find useful for more insight into the history of this beautiful, disappearing art form:

http://www.pbase.com/mgrove/hood_ornaments – This is a good photo reference site that can help you identify many past marques.

https://www.historicvehicle.org/News/Articles/All-Articles/2012/02/23/Sex-Lies-Dancing-Elephants – This site delves into the history and back story of several legendary marques and is quite an interesting read. 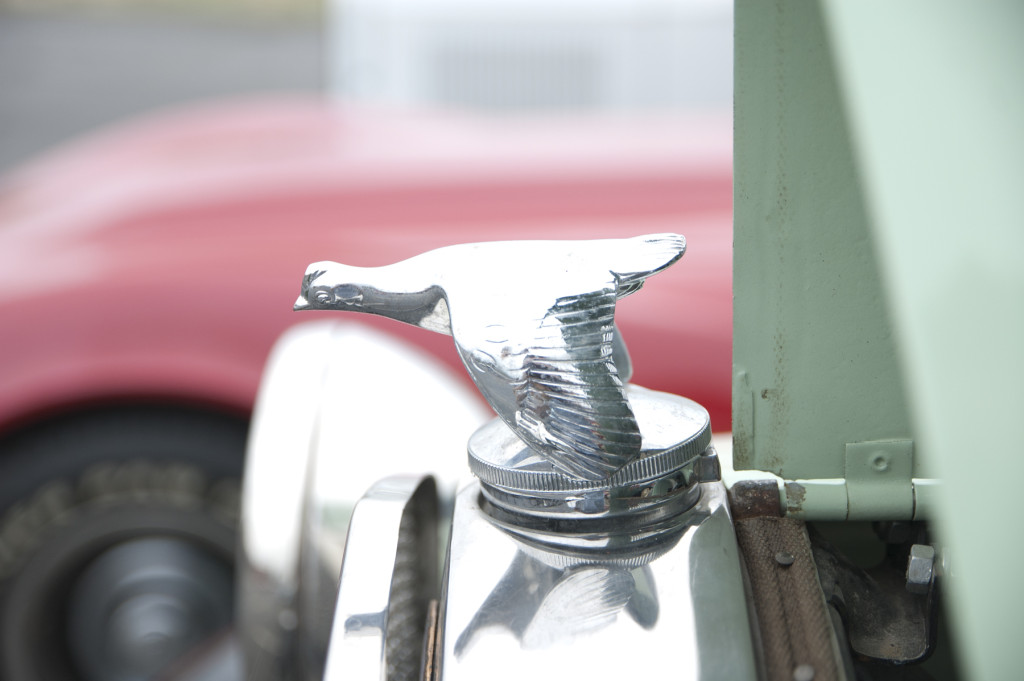 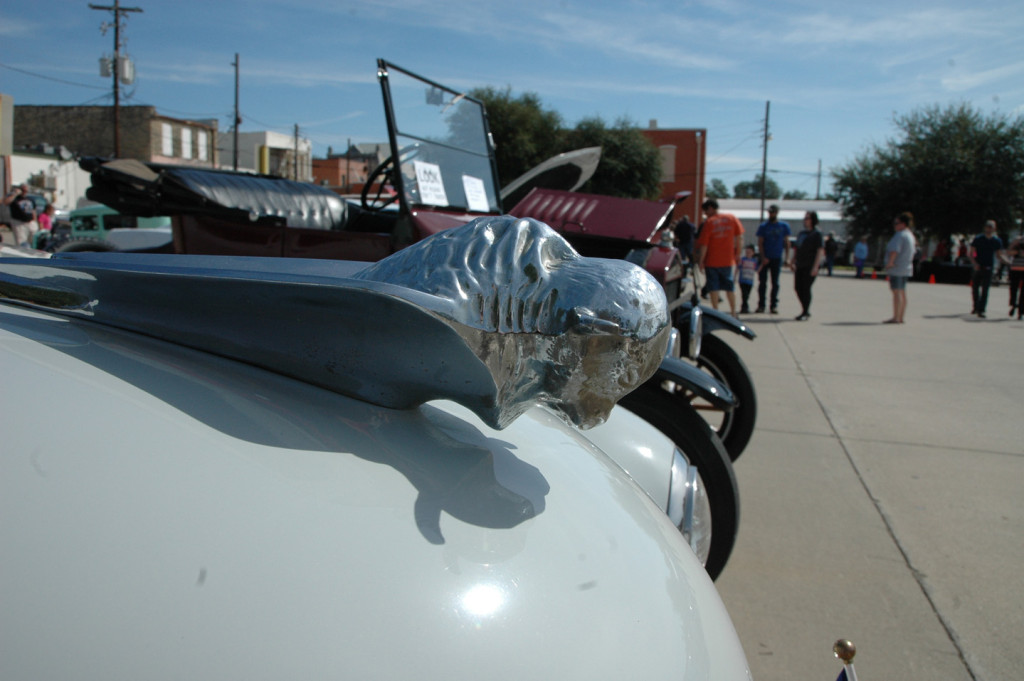 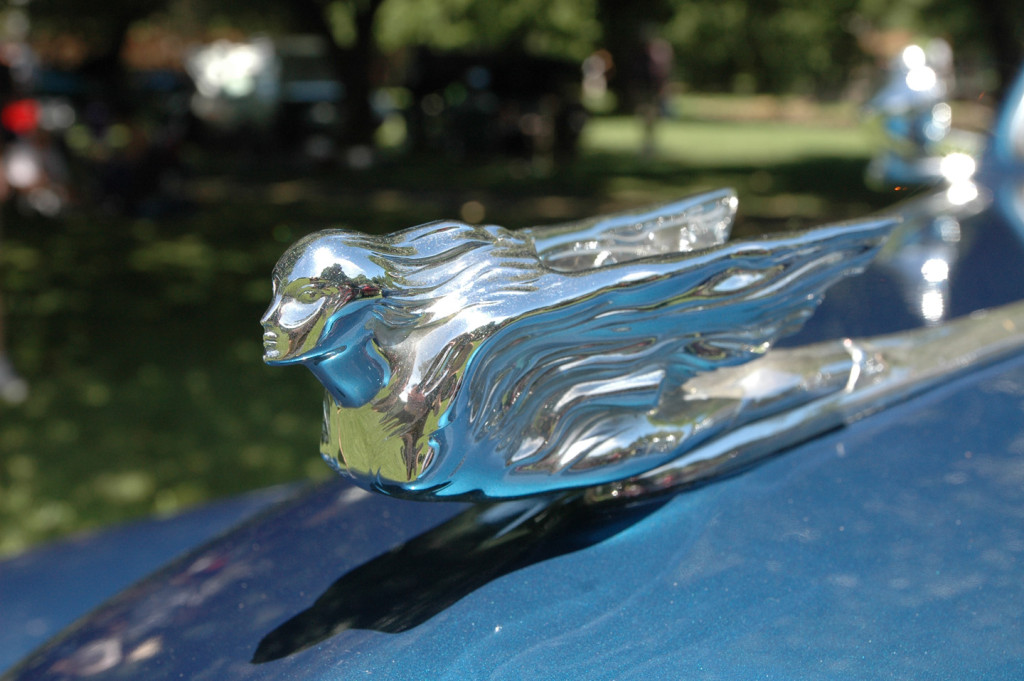 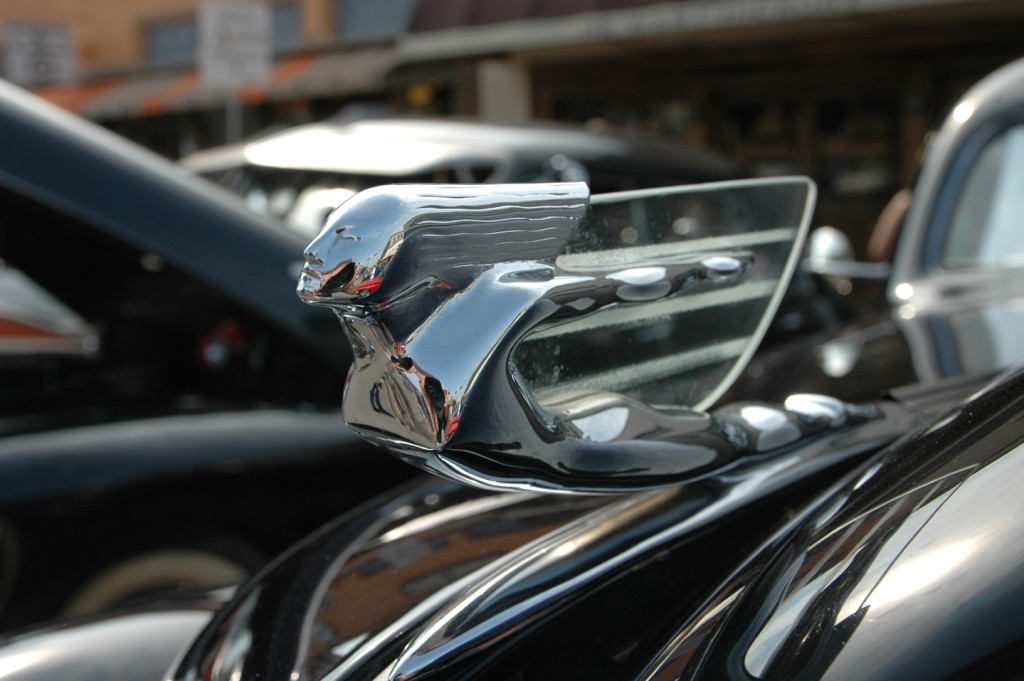 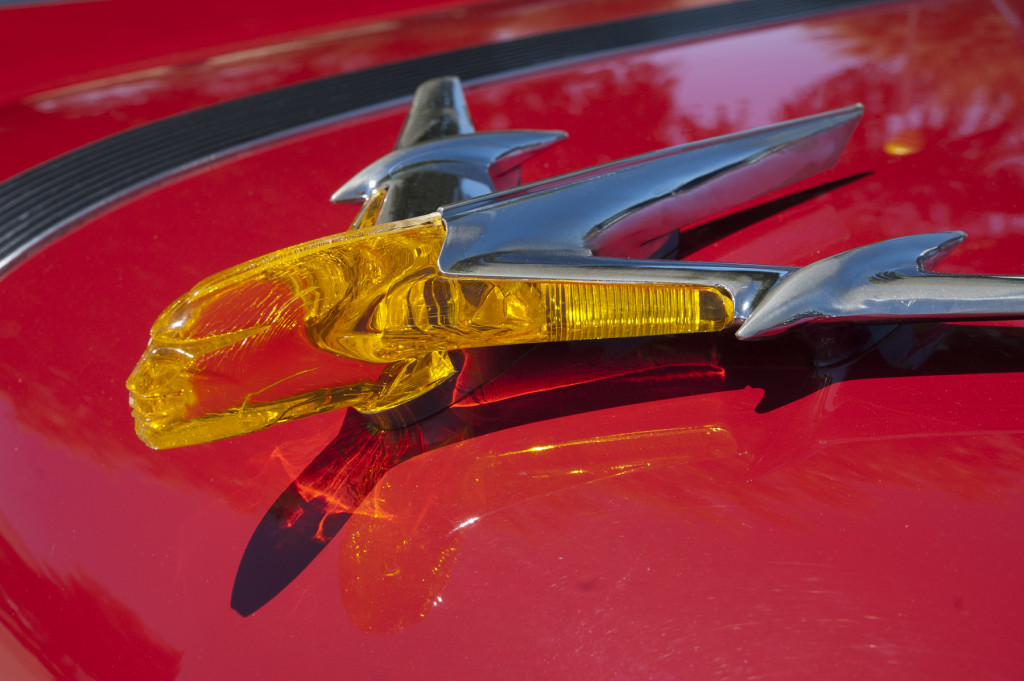 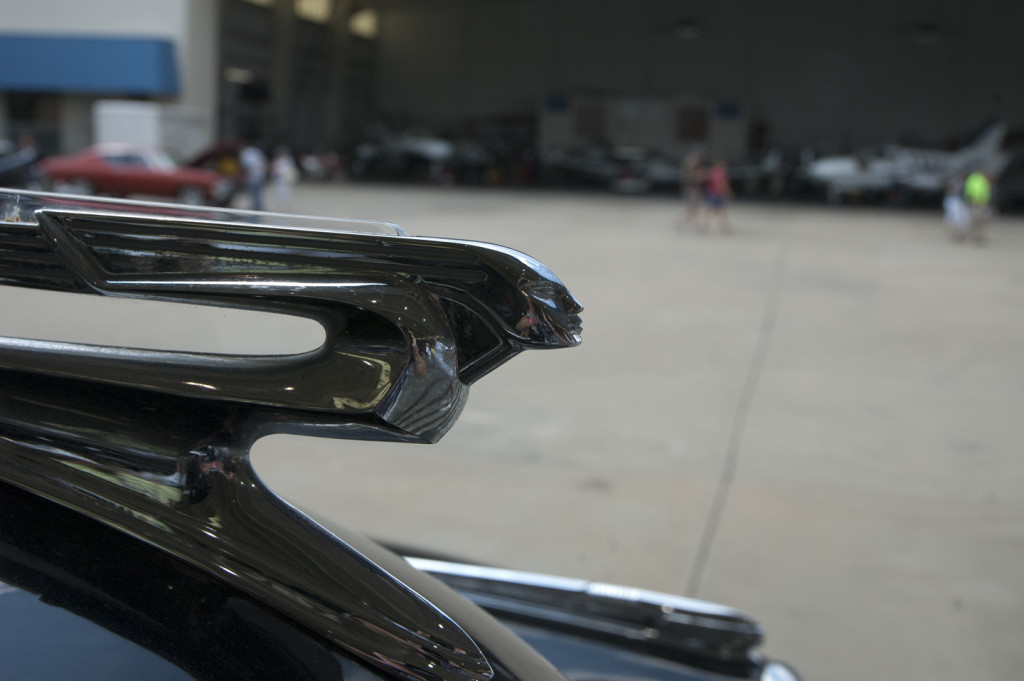 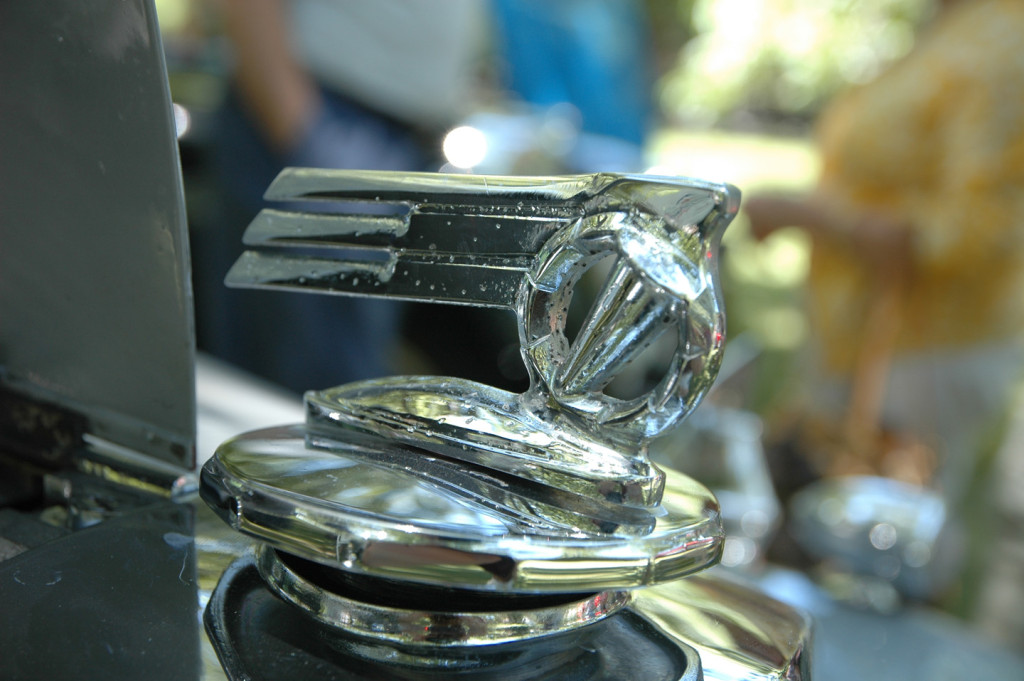 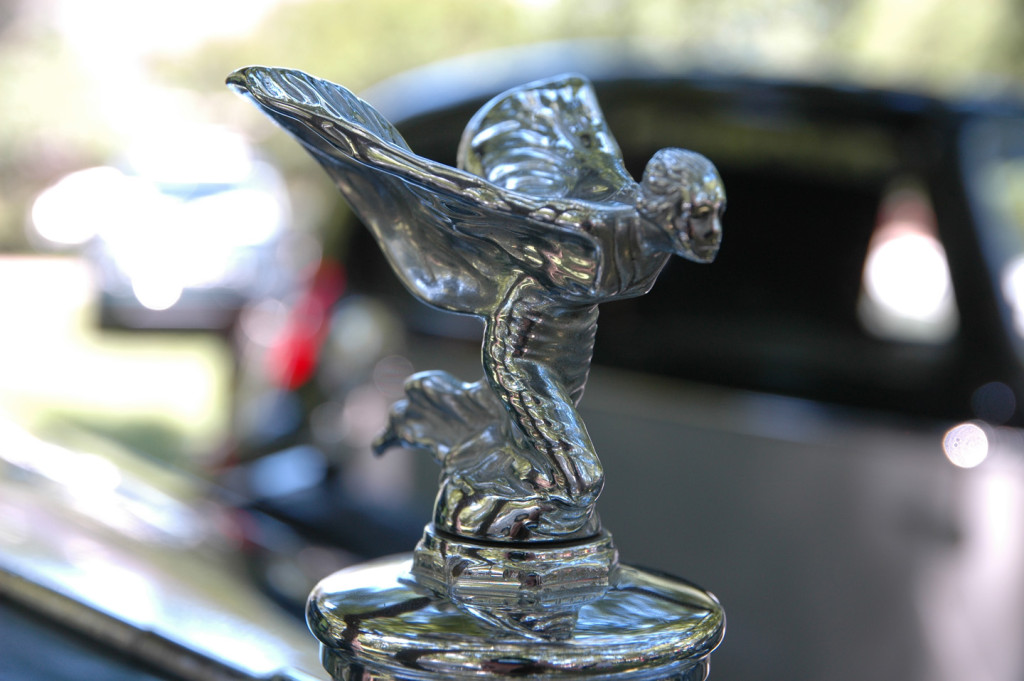 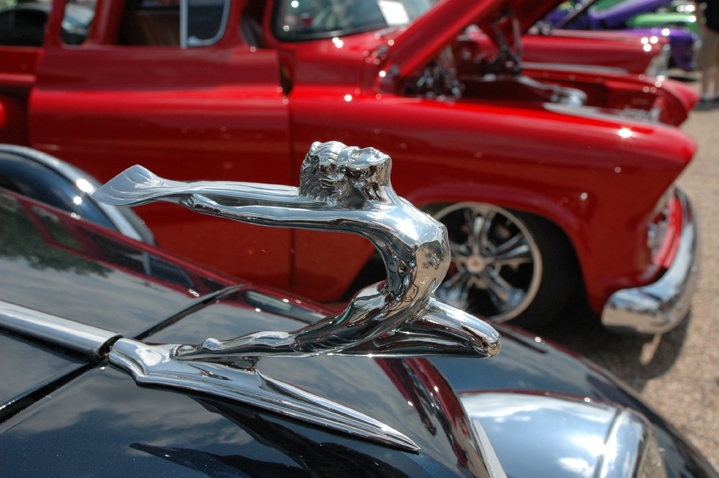 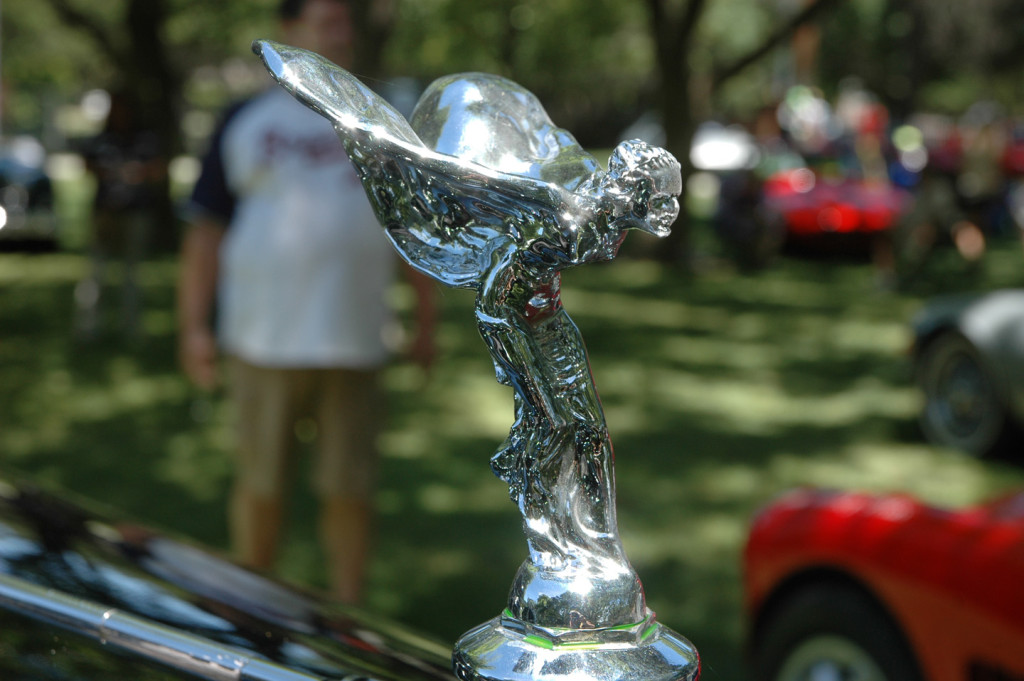 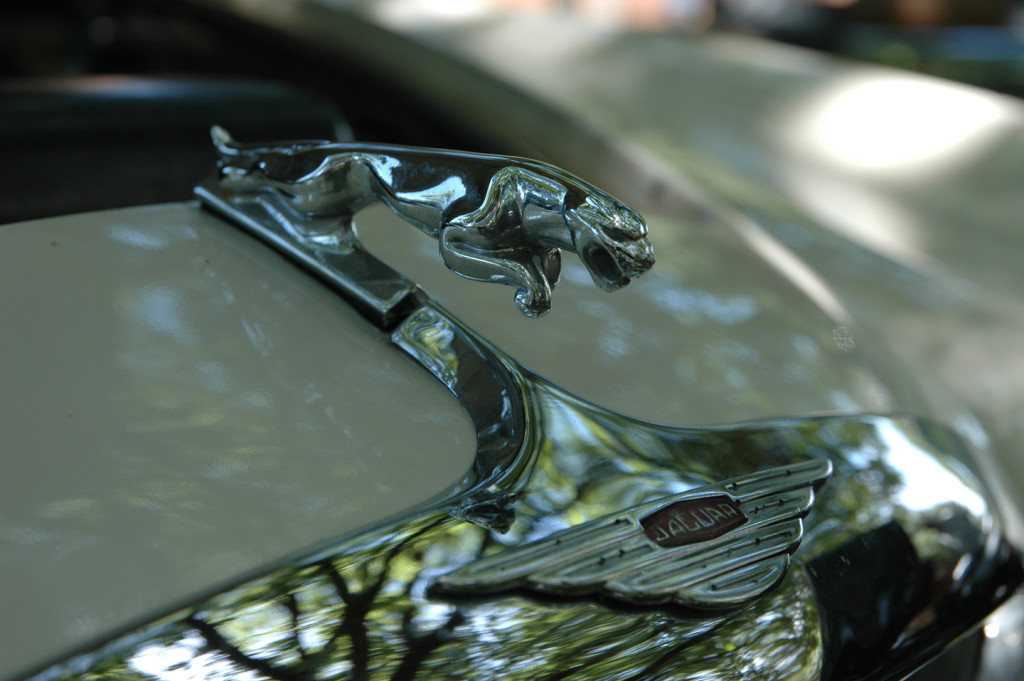 Jaguar
Often referred to as the Leaper 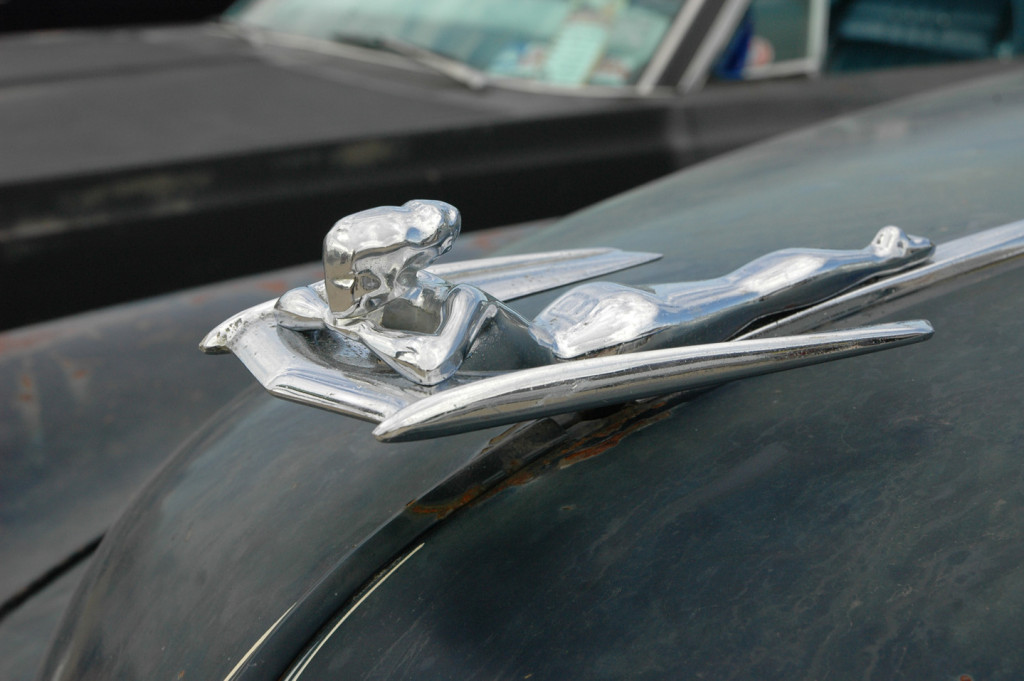 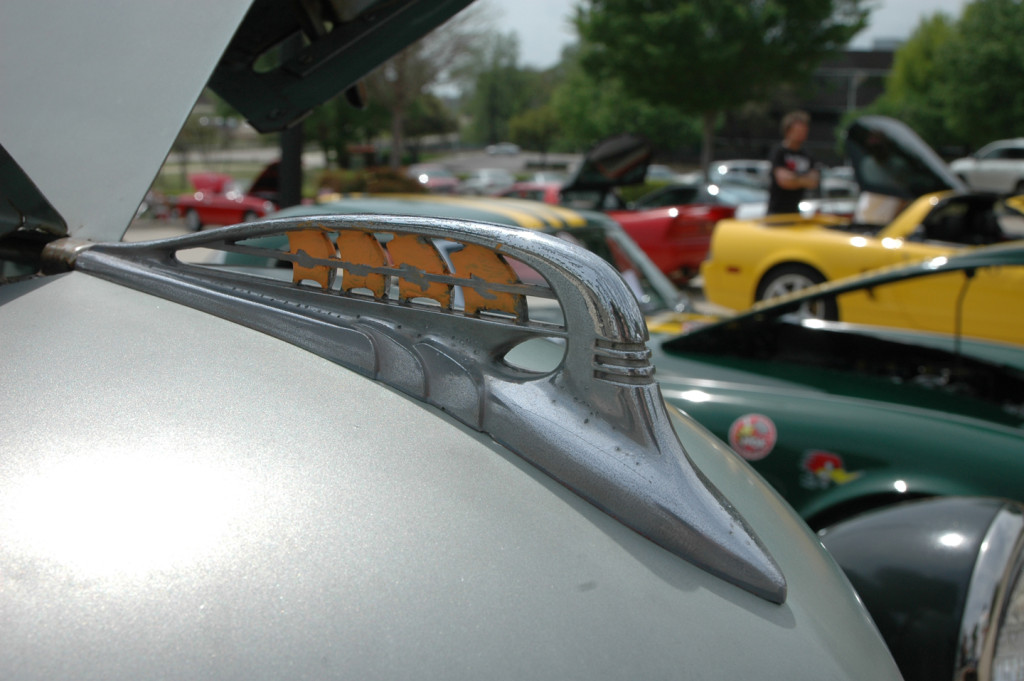 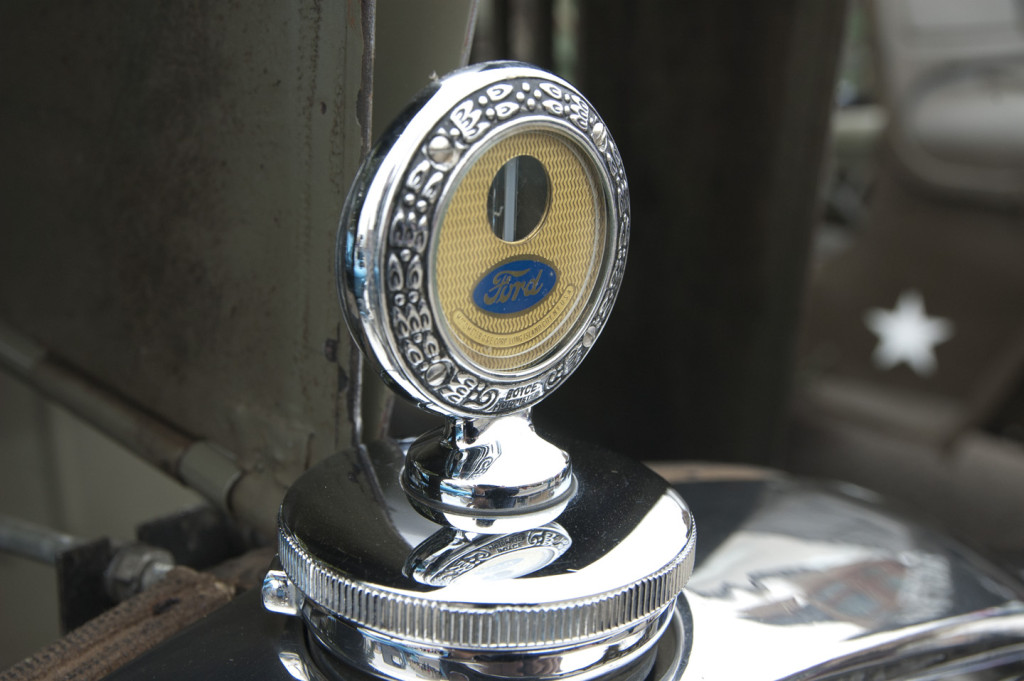 Ford Model A
This shows the MotoMeter style thermometer 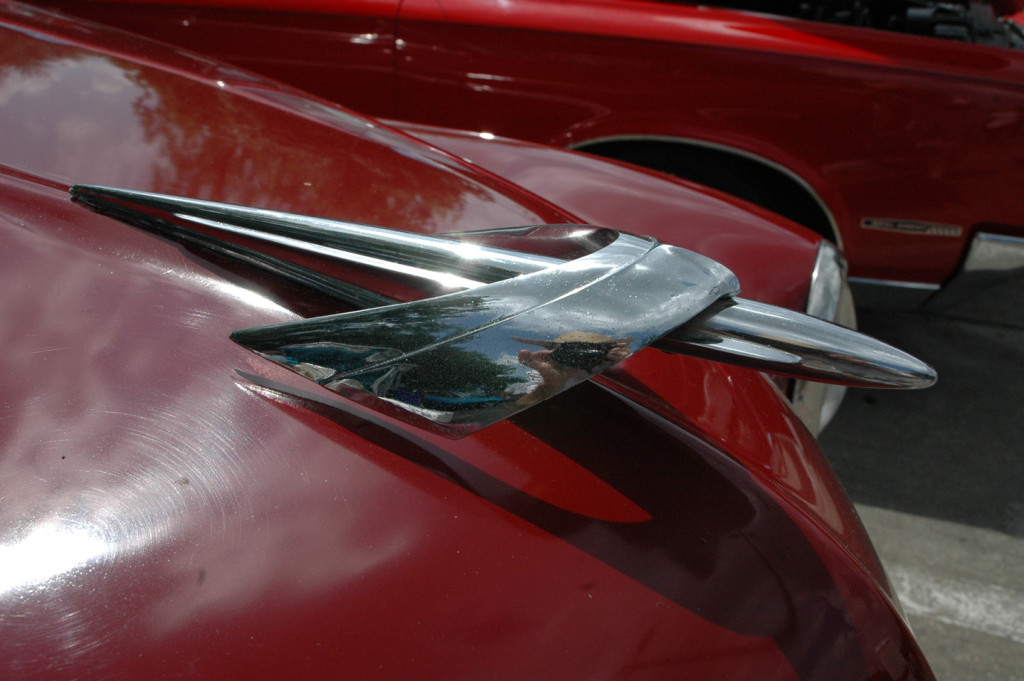 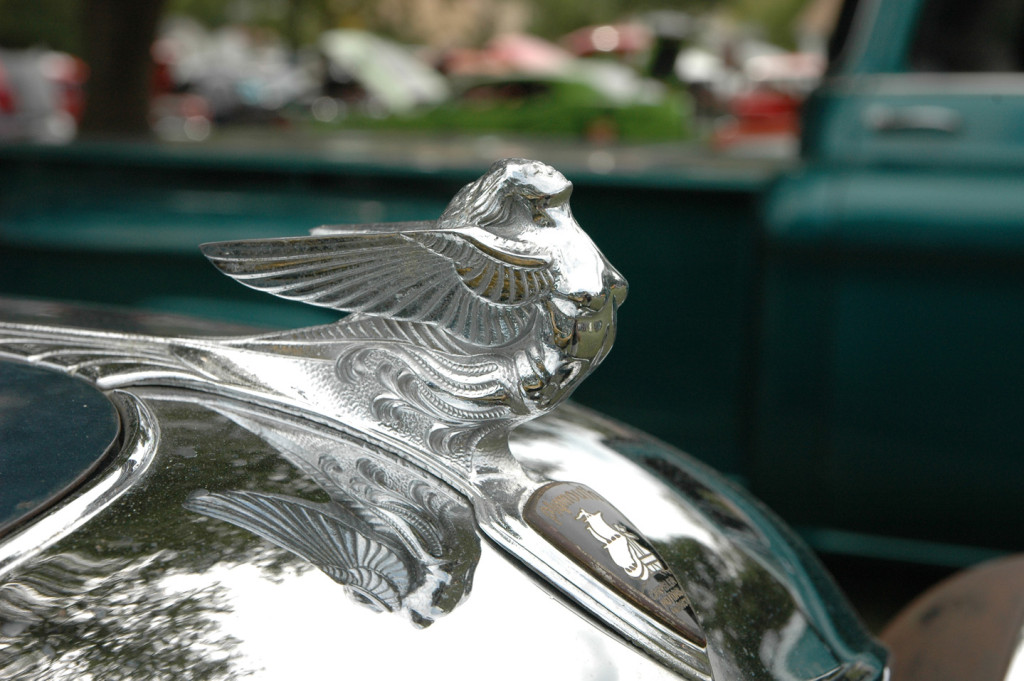 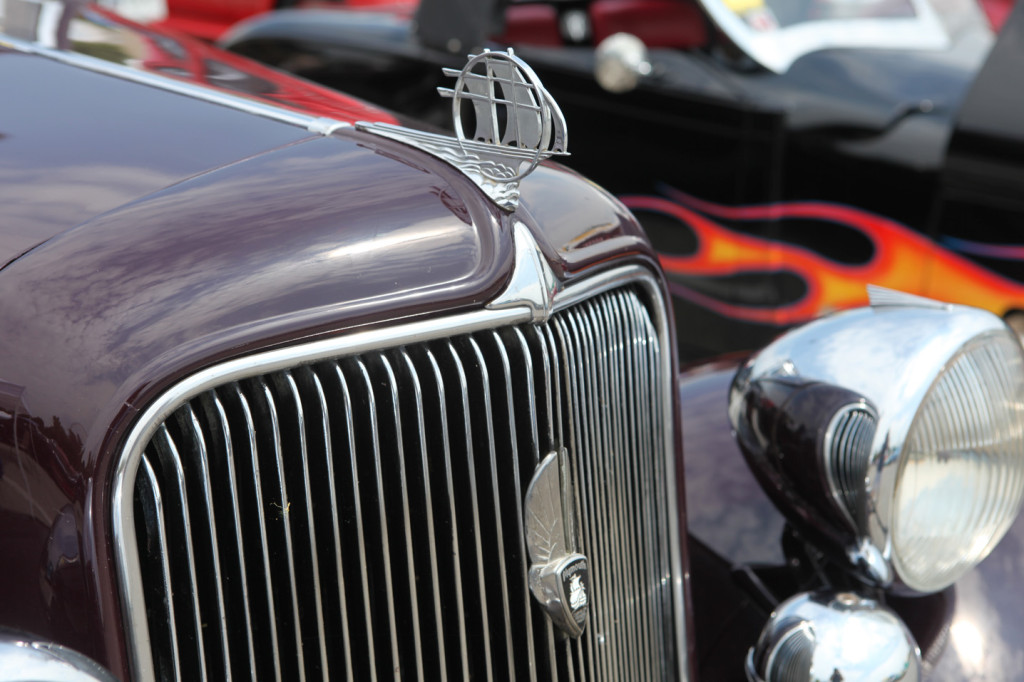 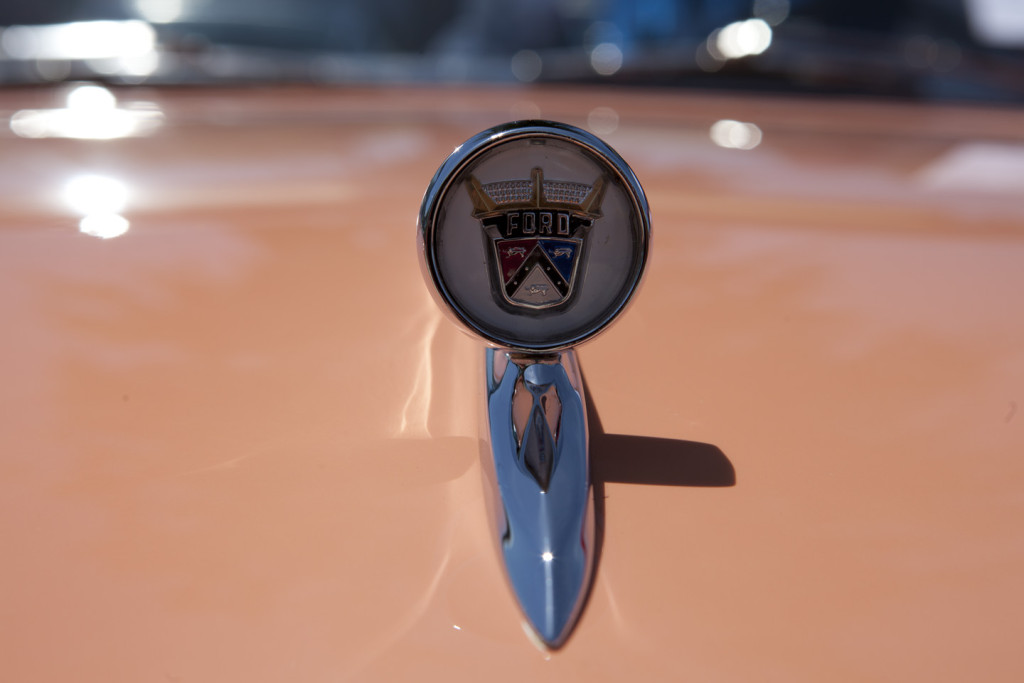 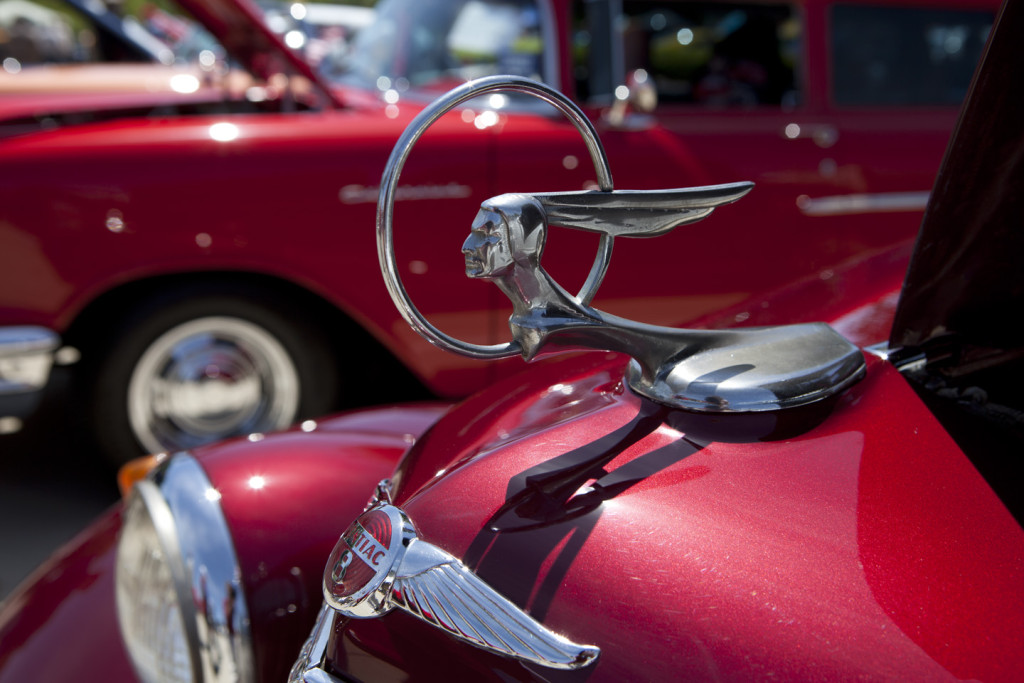